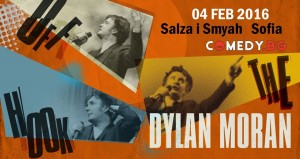 Dylan Moran is a world famous name in the stand up comedy industry. Made himself famous during the 90s, Dylan’s sense of humor is so natural that he earned himself roles in comedy movies such as “Shaun of the Dead” and “Run Fatboy Run”. Moran was also a star in the “Black Books” TV series. That way Dylan Moran proved he was one of the funniest people on the planet.

His show will take place at the 4th of February in 2016 at the theater Salza i Smyah in Sofia.

Some describe him as a shag-haired, world-weary Irishman who is always smoking a cigarette and has a glass of wine in his hand. In Dylan’s stories you’ll find illogical, unreal and absurd scenarios which are breathtakingly funny. You can expect, or should I say won’t expect his deadpan delivery which makes his jokes even funnier. Most people describe the Irishman’s comedic style as almost poetic.

Dylan Moran regularly performs at festivals like the Montreal Comedy Festival, Just for Laughs, Edinburgh Festival Fringe and many others. His show is a must see if you are a person that likes stomach aches from laughing.